Title No.12 ahead of Nantes clash 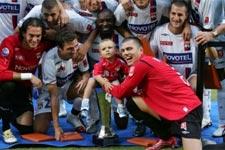 With victory over PSG, OL won their fifth consecutive Trophée des Champions, their 12th trophy since returning to the top flight in 1989/90. Now they turn to the start of the Ligue 1 season against Nantes this Friday.
An Intertoto Cup in 1997 along with Bastia and Auxerre; a Coupe de la Ligue in 2001 v. Monaco; 5 Trophées des Champions (v. Lorient, Auxerre x 2, PSG x 2) and 5 times French champions. 12 titles including 11 in the last seven seasons! Coupet has only missed one: Sunday’s win over PSG. Cacapa has ten. Diarra and Govou 9. Müller and Juninho 8... This seventh amazing season, which began on Sunday with the Trophée des Champions now continues with the start of the Ligue 1 season against Nantes.