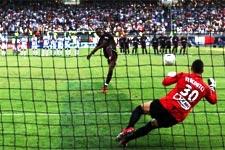 It’s interesting to note that of the last 10 shoot-outs , 3 have been held at the Stade Gerland for 3 wins and one on neutral territory (Cannes) v PSG in 2004. The six other shoot-outs on opposition soil have all ended in defeat.
Facebook
Tweet
Forum