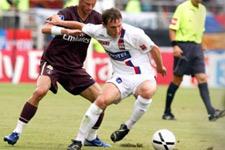 Olympique Lyonnais won their fifth consecutive Trophée des Champions on Sunday, defeating Paris Saint-Germain 5-4 on penalties after the match ended 1-1 after 90 minutes. Jérôme Rothen had opened the scoring on 62 minutes before Karim Benzema equalised from the spot eight minutes later.
The first trophy of the season was one to be won, as Gérard Houllier said, for the confidence, to maintain the habit of winning and to go one better and make it five consecutive Tropheé des Champions wins.
Having defeated Lorient (2002), Auxerre (2003 and 2005) and PSG (2004), nobody has engraved their name on the trophy other than OL since 2002.

Before kick-off, and on the back of four wins in a row, there was no question of treating this match lightly on Lyon’s side, even if Paris coach Guy Lacombe played down the importance of the match, labelling it just another warm-up game before the start of the new Ligue 1 season. Was it just words from the PSG tactician to cover his side’s true ambitions? That’s certainly how the fans felt at the end of a balanced opening 45 minutes during which Paulo César went so close to breaking the deadlock.
Luckily, Rémy Vercoutre remained focused right up until the half-time whistle from Mr. Layec to save the last (and best) of Paris’ attacks. Paulo César, alone in front of goal, had no space at all to beat the Lyon ‘keeper who kept the sheet clean as the two sides headed for the changing-rooms.

Rothen had already stung Vercoutre’s palms with a vicious 25m shot… Paulo César followed suit on 26 minutes… and finally Edouard Cissé saw his effort come back of the right-hand upright before Rémy could pounce on the loose ball.
For Lyon, Benzema had opened hostilities after just five minutes from a tight angle, but Mickaël Landreau made a comfortable save in his first official match in his new colours. Jérémy Toulalan, who had slipped free of the marking, then saw his effort turned behind for a corner (9’).

Mr Layec stayed in the changing rooms at the end of 45 minutes, replaced by Mr Aurolix for the only change at the start of the second period.
As the match began to swing in the Olympians’ favour, it was the Parisians that opened the scoring at the end of a swift counterattack just after the hour mark. Paulo César crossed for Pierre-Alain Frau who blasted away at Vercoutre. The Lyon ‘keeper made and instinctive two fisted reflex save before Rothen fired home the loose ball with a half-volley into the top corner. Rémy, only just back on his feet, could only watch as the ball flew into the back of the net…
During a corner kick, Kim Källström was awarded a penalty kick to be taken by Benzema. The France youth international won his duel with Landreau, waiting to last moment before opening his right instep and guiding the ball home.
Some little early season niggles saw Samy Traoré replaced by Chantome, followed shortly after by François Clerc and Rothen. The latter returned to the field with a bandage on his head and just had time to take out Clerc, replaced by Patrick Müller.

The final minutes were full of goal mouth action, but neither sie could find the eventual winner: Benzema found Landreau (80’); Bonaventure Kalou missed the target (83’); Vercoutre punched away a deflected effort from Frau (85’) and a Rothen free-kick flirted with the top corner before ending its course in the stands (90’).

With the match ending all-square at 1-1, the two side’s headed to the northern Stand for the penalty shoot-out.
Mario Yepes converted the first effort. Carew did likewise (1-1). Paulo César didn’t balk and neither did Toulalan against his former skipper (2-2). Frau and Ben Arfa then made it 3-3. Rothen and Benzema maintained the status quo (4-4). Vercoutre then saved Kalou’s spot kick and Djila Diarra then fired home the victory, 5-4, which saw Olympique Lyonnais make it another five in a row.
Facebook
Tweet
Forum