Vercoutre: “Get off on the right foot” 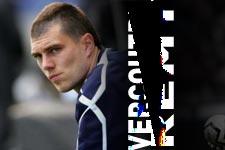 PSG is obviously no ordinary team for Rémy Vercoutre. After coming on in last season’s championship winning game at the Parc des Princes in the 68th minute, he will once again be between the posts this Sunday for the Trophée des Champions…
“That’s just part of the job,” said the Grande-Synthe native simply. France’s great run in the World Cup, coupled with Grégory Coupet’s obligatory three-week holidays have given the reserve ‘keeper another chance to shine in the first official match of the new season. “For me, each time I get to play is a bonus. I’m just happy to be playing.”
It’s a joy that he mixes with his exemplary professionalism in front of his two young trainee ‘keepers Joan Hartock and Rémy Riou. Within the closed circle of Lyon’s goalkeeping fraternity it was only natural that in Greg’s absence, Remy take the leading role at training. And the chance to offer the club its first trophy of a new season offers him, plenty of motivation. “Everyone is up for this one. Every single player is focused and ready to give everything to win this Trophée des Champions on Sunday.”

If some observers consider this match little more than a final warm-up game for the season, OL’s final line of defence looks at it as the match that sets the side on its way for the rest of the season. “Every year it’s the game that launches us on our way. We want it to be as good as the last four. We need to get off on the right foot on Sunday.”

And he knows it won’t be easy: “It was already going to be a tough match, but when you add the heat, it’s a very important factor that can’t be overlooked in the preparation.”

This Sunday, the Olympians will also benefit from the undying support of their incredible fans inside the Stade Gerland: “We disputed the Trophée des Champions at home, three years ago against Auxerre (victory 2-1). It worked pretty well that day.”
Facebook
Tweet
Forum