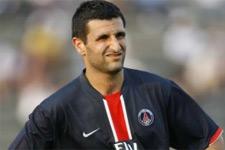 At Aix-les-Bains, Guy Lacombe was without Yepes and Diané with niggling injuries, as well as the internationals Dhorasoo and Pauleta. M’Bami still does not figure in the coach's plans. Landreau played the entire match. Rozehnal and Kalou played one half of football.