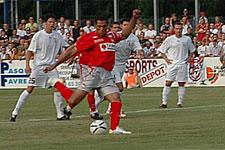 A fourth consecutive pre-season friendly win for Olympique Lyonnais. Gérard Houllier’s side defeated PAOK Salonika 2-0 on Tuesday, thanks to goals from John Carew (11’) and Loïc Remy (50’). The club now turns its attentions to Sunday’s clash against Paris-SG.
It was a packed house on Tuesday afternoon at the Stade Armand Chouffet where 3,000 Lyon fans made the short trip up the Soane to Villefranche.
For this final hit-out before OL host PSG in Sunday’s Trophée des Champions, Houllier decided to start Patrick Müller, who returned from holidays last week, and Karim Benzema, just back from a calf strain. In midfield, summer signings Kim Källström and Jérémy Toulalan were once again alongside Djila Diarra. And following his recent good form, Hatem Ben Arfa was starting on the right flank of the Lyon attack.

In the opening minutes, Benzema went close to opening the scoring, but neither his free-kick (2’) nor his shot from the edge of the area after a mazy run (5’) hit the target. Carew was out of luck early as well as he wasp ut through by Ben Arfa (3’). Carew started brightly and was brought down in the area by Hasiotis in the area and transformed the resulting penalty himself for his third goal in his last two friendly appearances (11’).

The other form player from these friendly games has been the Swede Kallström and he stung the ‘keeper’s palms in the 19th minute. Benzema did likewise just three minutes later.
François Clerc was another player having a good game and Carew was within centimetres of converting a Clerc cross from the right (30’).
Ben Arfa and Benzema then combined to set up Kallström but his shot kissed the outside of the left post (37’). For the opposition, the striker Yasoumi went close on three occasions to getting the equaliser (13’, 21’, 25’) and Hasiotis also headed wide (41’).

[IMG40853#R]After the break, Houllier made a number of changes and brought on Benoït Pedretti, Loïc Remy, Romain Beynié, Anthony Réveillère and Sébastien Squillaci. In the second half, Clerc found himself playing a more advanced role further up the pitch.
Despite the break, OL began the second half in the same way they finished the first : attacking. After a run down the left from Jérémy Berthod, Loïc Rémy controlled and shot, scoring his first goal with the professional squad (50’).
Carew went close to making it two braces in as many matches but his ferocious effort was palmed away for a corner (59’). Pedretti was the next to his shot saved by Fernandes Daniel (75’).

Careful not to leave themselves exposed at the back, the Lyon back-four gave little space to their Greek opposition. They have now finished their series of friendlies with four wins from four, 12 goals scored, two conceded.
Facebook
Tweet
Forum