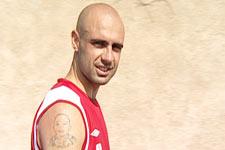 There’s no rest for Cris, only just returned from Brazil. He was already out sweating on Tuesday morning around the pitch at Tola Vologe as he reacquainted himself with Master Robert Duverne’s whistle for the start of his pre-season preparation…
The ’Policeman’s’ jogging did not come easily and the face betrayed his suffering. It’s not easy getting back to work. Cris, how are you? “I’m ok. I’m happy to be back. In Brazil I did some sport: I played football with my mates, did some weights. Now I’m really desperate to get back into competition. I missed it.” When we asked him when he’ll be back on the pitch playing, he smiled: “No, I can’t play immediately. First I have to work with Robert. I hope to play a half with the reserves this weekend. In ten days or so I should be getting back ready...”

Present in the Brazilian World Cup squad which was so disappointing in Germany, Cris may not have kicked a ball in competition, but he understands the reaction of the Selecao’s supporters. “That’s normal, the fans and the media weren’t happy. Before the World Cup, everyone thought we’d be crowned champions. It was a huge disappointment. We knew it would be difficult, and then we played against an in-form France team that deserved to beat us. I still want to play for the national team if Dunga, the new coach, calls me up.”

Back at OL where he has extended his current deal, Cris’ ambitions are clear: “If we can win a sixth title that would be great for the club and the supporters.” He may be a little out of shape but he’s not short of determination… “We need to be strong for what’s coming...” Cris is back. Fred arrives on Tuesday and Juninho, on July 29.

While Cris was chalking up laps of the field, preceded by Grégory Bettiol, no longer suffering from the start of a pubalgia, the rest of the Lyon squad was working on its tactics and its corner kick placing in particular...
Facebook
Tweet
Forum