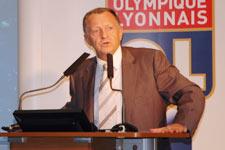 Following the Press Conference presenting the old and new club partners and the new playing strip, Olympique Lyonnais resident Jean-Michel Aulas spoke to the media about certain sporting issues...
Several aims? Every year you have to start again and every year is even more difficult than the previous one. We’re used to having an Olympique Lyonnais that sets out new goals each year. Each year it gets harder because our opponents are organising themselves more and more and in France the number one aim is to see the top team finish in the mid-table. That’s why you have to make sure you don’t take anything for granted, while all the while being extremely ambitious, and that’s what we are today.

I spoke about worries in the press conference? That’s an important element is always pushing yourself further. He without any worries is condemned to lose. We have concerns, fears, but they are to help us rebound and finds solutions to being even better. Improving each and every season is all about finding solutions, new players, new training facilities, new methods and, above all, a mental strength which never quits.

The main aim? To be successful in every competition we enter. That’s why try and have a large squad. The priority is to win a sixth consecutive league title, something no-one has ever done in Europe’s big leagues. Of course we have other goals in the domestic cups and the Champions League which are to go as far as possible.
With the problems being experienced by our Italian friends and the disappearance of certain big clubs from the Champions League, Olympique Lyonnais is currently seeded fifth. Three teams (Arsenal, Liverpool, Valence) have to play the preliminary round and if all three qualify then OL will drop to eighth, but still be in the top seeding group for the first time in the club’s history.

Recruitment? We have brought in three players which represent an outlay of €25m. We are still ready to let Sidney Govou go, and he will also need replacing.

Franck Ribéry? First of all, he has to return from his holidays after a very impressive World Cup. Then Marseille have to give him the opportunity to leave. When the time comes we will make contact with Marseille to discuss the matter, while acknowledging that OM don’t want to let him go.
Franck is still out no.1 priority, but we are still looking at alternatives if he doesn’t join.

The start of the season? We have nine or ten players that can’t start the French league and everyone thinks it’s funny. It’s a problem of equality, morality. With ten or 11 players on international duty we can’t just make a team suffer because they’ve been too good in recent years, but there’s no guarantees that that will be the case this season. We’re a little frustrated by this decision. Certain of our opponents are delighted, especially those that may benefit. We also note that Canal+ have asked us to start on Friday, August 4 for their TV schedule... That makes me laugh because in the Canal+ team of the year for last season, six of them were at the World Cup and won’t be present for the opening match. We’ll have to start with a ‘B’ team. When Marseille went to Paris with a ‘B’ team it was ‘unbelievable’, but when Lyon has to present a ‘B’ team – minus nine internationals who were at the World Cup – nobody says boo.

Everyone knows that in all of Europe, only the French league starts on August 4... Italy starts at the end of August, Spain at the start of September, Germany August 12, England August 18...
Only France, who was in the final of the World Cup starts on August 4. And if that’s not enough, we have to play the day early, on the Friday evening... is it to weaken OL so that they lose from the beginning? Look at the calendar, OL plays three of its first four games away from home... you can see why we’re not happy…
Facebook
Tweet
Forum