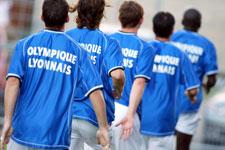 Check out all the photos of Lyon's friendly match with Grenoble.
5-0 and a very promising performance from a young Olympique Lyonnais side, still without its World Cup stars.

It was a successful debut for Kim Källström, author of one assist for Haten Ben Arfa to open the scoring. It was a good game for Ben Arfa who scored and earned a penalty, transformed by Karim Benzema.

In midfield, Jérémy Toulalan was a hive of activity in front of the defence. Alongside Claudio Caçapa and Anthony Réveillère, Sébastien Squillaci didn't take long to feel at home. Playing on the left side of the defence, the former Monaco stopper was irreproachable.