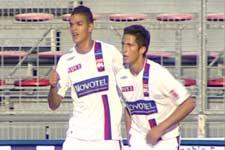 Olympique Lyonnais comfortably won its second pre-season friendly over Grenoble 5-0, thanks to goals from Ben Arfa (11’), Benzema (26’ pen., 46’) and Carew (66’, 90’).
As early as the 11th minute, Hatem Ben Arfa opened the scoring from a Kim Källström lay-off after a good cross from Romain Beynié.
A quarter of an hour later the goalscorer got on the end of a good Sébastien Squillaci through ball and got the better of Robin to earn a penalty, put away by Karim Benzema (26’).

At the end of the first half, Grenoble looked dangerous via N'Diaye, Yanev and Kamissoko without getting the better of Rémy Vercoutre.
Karim Benzema could even have given Les Lyonnais a three-goal lead at the break, but his effort was cleared off the line by te Grenoble defence (44’). In the same minute, the Grenoble coach, Yvon Pouliquen was sent off.

Of particular note in the opening period was the positioning of Squillaci on the left side of the defence while Ben Arfa was on the right of a three-man attack.

During the break, coach Gérard Houllier made nine changes, but it didn’t stop the Olympians making a bright start. From another through-ball, Benzema beat Wimbée (46’) and then it was the turn of John Carew to get his name on the score sheet, profiting from a good ball from Idangar (66’). Obviously Benzema enjoys playing against Grenoble: in last season’s Coupe de France the Lyon striker scored his first double with the pros.

In stoppage time, Carew followed his fellow striker’s lead in scoring his second and Lyon’s fifth (90’).

Up against a Lyon side controlling the play and taking its chances in front of goal, Grenoble played virtually the entirety of the second half with ten men following the 46th minute expulsion of their captain Matheus Vivian (91’).

Gérard Houllier was happy with his player’s performance: “After the camp at Tignes, I’m very satisfied, especially with the young players. In the second half, e obviously benefited from the sending-off of their captain. Compared to where we were this time last year, I have the impression that we’ve taken the next step.”
Facebook
Tweet
Forum