GF38-OL: a look at Grenoble 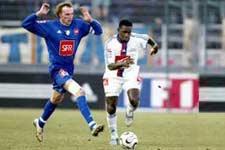 Lyon travels to Grenoble on Sunday where they will play their second pre-season friendly. Ligue 2 side GF38 has changed a lot during the off-season...
President Watanabe's Grenoble side is still in Ligue 2 after finishing last season in 10th place with 48 points (12 victories, 12 draws and 14 defeats; 42 goals for and 45 against). Akrour, who began his career in the English fourth division with Sutton United before playing with Istres, Troyes (13 L1 matches, one goal) and Le Havre, was the club's leading scorer with 12 goals, ahead of Kermorgant 6 and the Japanese Oguro, 5. The latter travelled with Japan to the World Cup in Germany.

Grenoble, who were beaten 4-0 by Lyon last January in the last 64 of the Coupe de France (Benzema x 2, Ben Arfa and Diarra) have changed coach. Yvon Pouliquen has taken over from Bernard Blacquart, who was a stop-gap following the March 20 departure of Thierry Goudet. The Breton, a former player with Strasbourg, won the Coupe de France as a coach with Strasbourg in 2001, and then with Lorient 12 months later. On the field, Grenoble welcome Grégory Wimbée, the former Nancy, Lille and Metz 'keeper; Jimmy Juan, a 23-year-old defender from Monaco, Martial Robin, a 28-year-old defender from Ajaccio and Hristo Yanev, a Bulgarian midfielder who joined from CSKA Sofia. These new recruits join up with Akrour, Pele, Stinat, Kacemi... and promising young striker Giroud.

The GF38 resumed training on June 23 and had a pre-season camp at St-Gervais as well as playing three friendly matches. On July 1 they beat Yverdon, 2-1 with goals to Akrour and N'Diaye; on July 4 they beat Gueugnon, 1-0, thanks to Akrour's lone strike before losing to Troyes, 1-2, with a goal from Giraud. During these matches Yvon Pouliquen rotated much of his playing staff. In attack, the Akrour-Giroud partnership looks good with Oguro not back training fully after the World Cup. The Bulgarian Yanev should start against OL.

Grenoble, whose new stadium is still under construction, will play a second season at Lesdiguières, traditional home of FCG Rugby. They host Montpellier in the opening round of the Ligue 2 season on Friday, July 28.
Facebook
Tweet
Forum