Day 5: Endurance on the pitch 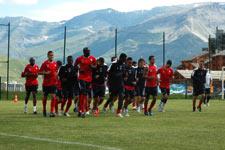 July 14 saw a change of scenery as the Lyon players returned to the football field - without the ball in morning, and with it in the afternoon...
After a day dedicated to mountain biking and rafting, the players enjoyed a night off without the coaching staff. In the early hours of July 14, Jo Bats partook in a spot of fishing down by the lake. But at 10:30am, the squad had a rendezvous at the local stadium for an endurance session without the ball. There was no time to enjoy the sights as Robert Duverne concocted a program to have the boys in a sweat. On the menu for France's national day? A serious warm-up before working in groups. Four different exercises at each corner of the pitch. Cacapa and Co. had to complete six rotations of the four disciplines - in other words, a 40-minutes work out with barely the time to draw breath. No need to say that the squad quickly had their minds on the job at hand. The weather? A mixed bag with thunder storms predicted for later in the afternoon...

"C'mon lads, it's all mental... concentrate on what you have to do and on doing properly. Don't cut any corners..." Patrice Bergues, Jo Bats, Rémi Vercoutre encourage, congratulate and push the players beyond their limits. But the faces betray the suffering. After riding up Iseran and heading down the Isère river rafting, Friday morning was no picnic. At the end Rémy Vercoutre whispers between gulps of air: "Well that's another one out of the way..."

To warm-down, the squad indulged in a few minutes stretching before returning to the team bus. Many spectators took the opportunity to grab photos, an autograph or exchange a few words before it's time to head back to the H^tel Montana. At 17:00, the Olympians will be back at the ground but this time, with the object of their desire:
a football.
Facebook
Tweet
Forum