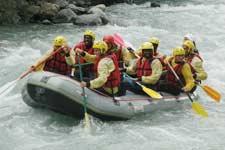 With the summit of Mt. Iseran overcome without a hitch, Les Lyonnais were back in the bus and on their way to Bourg Saint Maurice, 24kms and 1,200m closer to sea level…
At 13:00 the squad took a bite of lunch in the Val d’Isère before swapping their bike helmets for a water helmet as the players prepared for the traditional white-water rafting. “All went well on the mountain bike and everyone finished.” Gérard Houllier is satisfied. Kim Källström finished first ahead of Rémi Garde and François Clerc. “Kim profited from the help of a passing cyclist to overtake me just metres from the top. I had led from the start and I was beaten in a scandalous fashion. The youngsters? They talk too much so they get tired quicker. They lack a little experience.” Rémi gives his smiling summary of the 11km climb. 57 minutes for the Swede; 58 for Rémi and a little bit more for François. The latter also confirmed the former’s accusations. “Kim was certainly helped, and he was already fresher than us because he only just arrived. I didn’t remember the end being quite as tough as it was.”

Claudio Cacapa eases the time away. He talks about Brazil and gives updates on his compatriots. “Fred gets married on July 22.” He lifts his pants up to reveal his shin cut in several places. “You see these cuts? They’re from Diarra during training and the funny thing is, he was on my side!” Guy Genet prepares three bikes. "With Gérard and Jean-Jacques, we’ll follow the players from distance."

A little before 15:00, the four teams are ready for departure. Three groups of eight and one of seven. “Despite being handicapped with the presence of Patrice Bergues, our boat will still win…” Robert Duverne is optimistic. In the meantime, Patrice continues his show: ridiculous in his combination outfit, helmet and runners. “He needed a tube of Vaseline to get into his outfit,” cries someone amidst the laughter. The sky darkens and perhaps the players should take it a little easy...? From Bourg Saint Maurice to Centron, the length of the boat trip, should take the 28 men around 90 minutes. During that time, Guy Genet, Jean-Jacques Amprino and Gérard Houllier follow them gently on the mountain bikes. At the finish, one boat missed the exit and Réveillère and Co. needed another little effort.

Once back on terra ferma, the first mission is to get changed as the cold set into the wet clothes. “It really was a great day. Personally I’m happy because I improved my personal best on the bike and the descent was really good. Jérémy Toulalan was a legend, he did it all on our boat.” Jérémy Berthod jumps in the bus to and enjoys a well deserved rest. A great day… without a football. In an hour or so the squad will be back up to their hotel rooms at 2,100m above sea level. They’ll sleep well after such an up and down day…