Day 3: Endurance around the lake 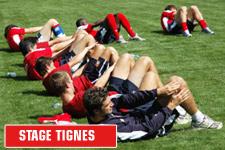 Variety is the spice of life and also one of the goals of Lyon’s pre-season training camp in Tignes. After breakfast, the Lyon players enjoyed a morning work-out by the lake...
Day three at camp began with the traditional morning wake up call of three laps around the lake on mountain bike followed by breakfast. On Wednesday morning the players then returned to the lake for a special endurance session thought up by Robert Duverne. With his stop-watch at the ready, OL’s fitness guru called the tune. In four groups, Les Lyonnais had to complete one full circuit in a given time. The aim was consistency w
While the players were sweating, ‘Doc’ Jean-Jacques Amprino prepared the fluids, doing his best impression of Tom Cruise in ‘Cocktails’ with the drinks trucked in byGuy Genet. The end of the session was for stretching amongst the regions other tourists. Rémi Garde did the work out with Cacapa, Réveillère and Co. The former Gunner still looks like a player. “I’ve never done anything so hard...” admitted the youngster Anthony Mounier. “We’re not used to working like this. Is the hardest part over? No, apparently that’s the mountain bike ride up Val d’Isère. That’s when you really have to unplug the brain.” Rémy Vercoutre finished his run with some leg work on the stairs. François Clerc breezed through the three rounds – he’s in great shape! The third round was tough all the same. I could have gone a little faster but the camp isn’t over yet. Tomorrow I want to win the race up Val d’Isère. I think I’ll try and make a quick start to demoralise everyone. Paul Le Guen used that tactic. Watch out for the kids, we’re quick!” The Scandinavians Kim and John recover with a chat. Swedish and Norwegian are practically identical.

Around 11:30, everyone is back at the hotel. Shower, relax, lunch and siestabefore a bit of ball work in the afternoon. There’s always sun in Tignes, but the clouds are edging in... John Carew puts his music on LOUD on the balcony... Diarra appears on his balcony and admits he was struggling during the final tour: "I just put my head down in the final straight and made it with five seconds to spare." The bells in the town church ring in midday…