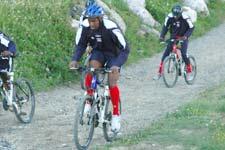 After just one night at altitude and the body barely rested, Les Lyonnais got their legs moving again with a mountain bike ride before breakfast...
At 7:30am Tignes is already a hive of activity. The Lyon squad had a rendezvous on the banks of the lake for a fairly muscular mountain bike wake up call. Gérard Houllier is the first on the scene. A few minutes later, will helmets on, the squad sets off on the first of three laps. A three kilometre circuit featuring two climbs, one of which is a real killer. Some even had to step off the bikes to make it up. The closer to the top the more tortured the faces and the heavier the legs. “Cycling isn’t really my thing...” admitted Jérémy Berthod, more or less exhausted, before adding jokingly: “You have to know how to pace yourself for this week.”

Vercoutre, Pedretti, Frau and Abdel Redissi set the pace in the peloton and the youngsters such as Mounier did well. Diarra overtook nearly everyone with his accelerations. In the middle of the pack Bernard Lacombe was right at home. But the end, as president Jean-Michel Aulas predicted, it gets harder and harder. After setting off at a steadier pace, Patrice Bergues and Jean-Jacques Amprino close the gap. “Slow and steady wins the race...” joked Patrice.

30 minutes later and it was over and it was back to the hotel for breakfast. At 10am the players were back in the bus and heading for the football pitch at the bottom of the glacier. On the menu: one hour and 45 minutes of tactical and possession work finished with a small game. The three ‘keepers did specific work with Joël Bats.
Gérard Houllier also finished his laps of the lake. The coach and the players had a press conference at 1:45 before going for a little jaunt up Val d’Isère. As the sun floods Tignes, the town prepares for a weekend beach rugby tournament with internationals such as Berjallien Bonnaire. The Olympians day is full of variation and there’s every chance of some weary legs come dinner time…