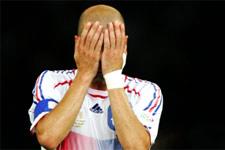 At the end of the the evening in Berlin, France had been defeated 5-3 on penalties by Italy after the match had ended 1-1 at the end of 120 minutes. The Italians won their fourth World Cup in the process.
At kick-off, Raymond Domenech had decided to go with the same starting XI he had entrusted the last three matches. Once again the French left-wing was 100% Olympique Lyonnais with Eric Abidal and Florent Malouda.

Right from the opening whistle the hard tacking Italians let their opponents know they had a match on their hands. Just seconds after Thiery Henry was knocked out by Fabio Cannavaro, Malouda burst into the penalty area and earned a penalty after the referee adjudged the winger to have been fouled by Marco Materazzi. With a delightful chip, Zinedine Zidane beat Gianluigi Buffon to score his third goal of the competition (7’).
However the Italians, dominating the opening period, were quickly back on level terms. Andrea Pirlo delivered a cross onto the head of Materazzi who climbed highest in the box and headed beyond Fabien Barthez (19’). France struggled with the Italian corner moves and needed Lilian Thuram to save his side from another Materazzi header (28’) before Luca Toni saw his effort cannon off the crossbar (36’).
During this period of trans-alpine domination (58% possession for the Italians at the break), Malouda offered the most resistance with a run and shot that only found the grateful arms of Buffon (31’).

Pushed on by the impressive Thierry Henry and the explosive Malouda, Les Bleus started the second half in style. The Lyon midfielder stretched the Italian defence to breaking point and should have had another penalty after going down under a challenge by Zambrotta (52’). The Guyana-born winger then watched agonisingly as his flew across the face of goal (54’) and his shot flash high and wide (65’).
Having defended well against Camoranesi in the first half, Abidal then looked after Iaquinta in the second and regularly got forward to support the attacks.
The French dominated the second half and the Lyon duo was at the origin of many of Les Bleus’ best moves as well as blocking the Italians progress up the right flank.

In extra-time, Franck Ribéry went within a whisker of giving France the lead (100’). Zidane thought he had done before Buffon expertly tipped his header over the bar (103’).
Fifteen minutes before the end, Sylvain Wiltord replaced Henry and moved onto the left and moments later Zidane was sent off for head-butting Materazzi (111’).

During the penalty shootout, "Nino" Wiltord and Eric Abidal both beat Buffon but David Trézéguet saw his shot come back off the crossbar before Grosso claimed the ultimate prize to his country, 24 years after their last win.
Facebook
Tweet
Forum