Beynié: "The season has started well" 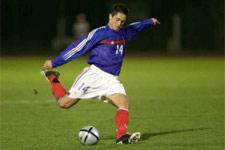 At the end of morning training, Romain Beynié, who finished first in the ‘beep test’, spoke about his satisfaction of training with the professional squad, as well as the pre-season camp in Tignes and his aims for the 2006/07 season.
Romain, a little word on this morning’s session in which you finished first in the ‘beep test’ (endurance)?
It’s good. It’s a tough test that everyone knows. I gave everything I had and it worked out well for me.

Why does this test do for the players?
It helps for the physical preparation to see where everyone is up to and prepare well for the season.

There are a lot of young players in the pro squad. Has that made it easier to fit in?
Yes, but even more so because the professionals are really good guys who have welcomed us really well. There’s really no problem there.

What is you main objective this season?
Exactly. It’s good to have started pre-season with the professionals, but we’ll soon be back with the reserves to compete in that league which is also very important. We train as often as we can with the pros with the aim that they take us on at the end of the year.

There will be friendly matches like this one against Dijon. Are you hoping to play?
Of course. We can measure ourselves up against top-flight professionals. In my opinion it will be a step up in intensity. It’s a great thing to be able to take part in this type of game.

You will also be heading to Tignes for the infamous training camp…
Yes, we’re waiting and getting ready. The older ^players have already warned us: we run a lot and it’s hard to recover, but you feel a lot better during the season. For us, it’s even better because we get to do it with the professionals.

You can also go without a worry since you got some good news this week...
Yes, that’s true. We go tour baccalaureates. It’s a weight off and also a great satisfaction. The season has started well.
Facebook
Tweet
Forum