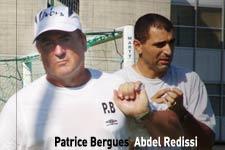 Under a searing sun and soaring temperatures, OL’s players arrived at Tola Vologe for a packed day. The squad is continuing to train twice a day...
While acknowledging that “the first few days of pre-season training are a little tough,” Patrice Bergues is delighted by the “good work” and the fact that the players have “worked hard over the holidays and followed Robert Duverne’s program.” Confirming the assistant coach’s praise, Jérémy Clément and François Clerc lead the charge during a timed endurance run, despite the challenging conditions. “The heat is our main problem at present,” said Bergues.

Confident in the progression of his team, the Créteil native was in optimistic mood: “Like last season, i twill be a five-week pre-season program. We know what to do, and now we just have to do it.” While the squad occupies itself primarily with physical work initially, Bergues outlines the coming weeks: “It’s not just a matter if getting everyone into shape. There’s obviously some technical work to be achieved in circulating the ball to be ready for the season.” Afternoon training is based on exercises about conserving possession of the ball.

During this crucial period, he refuses to take it easy on the players: “They will suffer for the entirety of this initial preparation period. It’s the hardest part of the season in order to be able to go for the duration of the campaign.”

On the eve of France’s World Cup semi-final against Portugal, Gérard Houllier’s right-hand man has also been impressed by Duvern’s work with the France squad: “We’re all very happy that everything is going well for Robert but we weren’t really worried. We miss him, but Toto (Guillaume Tora) is here to replace him. So we’re in good hands.” Always joking and sarcastic, he revealed his personal concerns for Duverne’s return: “I sit next to him in the office but I don’t know whether I’m allowed to go up to him or even talk to him anymore now that he’s a star. At any rate, we all hope he comes back with the statue...”
Facebook
Tweet
Forum