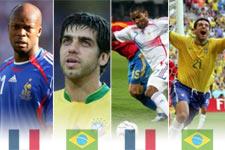 On Saturday, July 1, France take on Brazil in a bumper quarter-final clash which is also a replay of the 1998 World Cup final. Olympique Lyonnais will be the club side the most represented on pitch-side with no less than eight players taking part…
Lyon’s three Brazilians (Cris, Juninho and Fred) will meet up with their five Lyon teammates, chosen by Raymond Domenech for the World Cup (Grégory Coupet, Eric Abidal, Florent Malouda, Sylvain Wiltord and Sidney Govou) as well as their physical trainer (Robert Duverne). It’s an exceptionally rare representation which makes this quarter-final a very special match.

“It’s great for the club to have so many players taking part in a World Cup quarter-final. It proves that we’ve chosen the right players,” said Bernard Lacombe, before adding: “amongst themselves, because they’ve been through so much together. Sidney and Juni, for example, have won one Coupe de la Ligue and five national titles together.”

On the eve of the quarter-finals, a quick scan of club representatives reveals just how important Olympique Lyonnais has become in world football.
Having seen 11 of its players begin the tournament, OL can boast nine still qualified for the quarters. If 65 clubs can still count players involved in this stage of proceedings, OL is second behind England’s Chelsea, with 12 players.
Lyon is level with Juventus and AC Milan and ahead of Bayern Munich, Manchester United and Inter Milan.
Facebook
Tweet
Forum