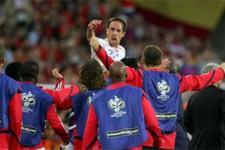 France, driven by a ‘Galactic’ Patrick Vieira are stepping up a gear – that’s the least one can say. After an average first group phase, Les Bleus qualified for the World Cup quarter-finals after defeating Spain, 3-1, on Tuesday.
France made a bright start, carving out chances to both Patrick Vieira and Franck Ribéry, but the French would have to wait until the end of the match to finally deliver their fans joy.
However it seemed a long way off when Lilian Thuram brought down Pablo Ibanez in the penalty box. David Villa stepped up and made no mistake with the resulting spot kick (30’).
But this France team is made of stern stuff. Ten minutes after the Spaniards went ahead, anda t the end of a lovely one-two with Vieira, Ribéry equalised just before the break (41’).
The second half was a tense affair, but ultimately controlled by Raymond Domenech’s side. Joaquin had a great chance to reclaim the lead for Spain but his shot flew just wide (78’). Just minutes later, Vieira headed France in front from a Zinedine Zidane free-kick (83’). In stoppage time, from a Sylvain Wiltord pass, Les Bleus’ captain Zidane then closed out the scoring and set up a mouth-watering quarter-final (90’).
Les Bleus now take on Brazil this Saturday.

At kick-off, there were two Lyon players in the starting XI. Lining up with a 4-2-3-1 formation, Domenech banked on Eric Abidal and Florent Malouda to hold down the left-flank as they do for Olympique Lyonnais.

Abidal showed himself to be the best option on the left-side of a four-man defence that left its opposition little time or space on the ball. Perfectly timed tackles completely closed down the left of the park, particularly after the introduction of the Betis winger Joaquin.

Opposite Spain’s right-back Sergio Ramos Florent Malouda was most dangerous on the counterattack, like when his superb lob was spectacularly turned away by Iker Casillas (53’). In the 74th minute he was replaced by club teammate Sidney Govou who took little time to get involved with a brilliant shot that flew just too high (80’).

At the end of the match, Wiltord came on for Thierry Henry (88’) and had just enough time to lay on a third goal for Zinedine Zidane with a superb pass.