T… as in Tifosi 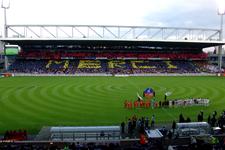 It’s time to learn your ABC, with one letter per day over the off-season. Today it’s time for T… as in Tifosi. The eternal striving towards victory is to Olympique Lyonnais, what the tifosi are to the club’s supporters: a simple way of life…
If Lyon received its just recompense for an incredible season on the pitch with the championship, the accolades haven’t stopped raining down upon the club’s incredible fans.

What single image could possibly sum up a season on the terraces so rich in imagination and creativity? Which banner or sign best portrays the recently voted, “Best Fans in France”? If we have to choose one, then perhaps it would have to be the 2006 Champions Trophy unveiled by the Northern Stand during the final home game of the season against Le Mans. A massive tribute to their club, the supporters’ attention to detail brought admiring and rave reviews from well outside the four walls of the Stade Gerland.

It would also be hard to forget the depiction of the Old Lyon in the Northern Stand: “Since the dawn of time, our city has lit up the region” or the Lyon King which traversed the full height of the Southern Stand. Few will forget that moment, proudly proclaiming: “Proud to be Lyonnais”.
As well as the incredible home support, one must also pay tribute to the incredible comportment of OL’s travelling fans.
What a brilliant impression was left by the 1,500 fans that travelled to Eindhoven, or the 9,500 that stopped everything to head to Milan. Despite the disappointment of the moment, Cris still had the presence of mind to thank their unconditional supporters: “I’d like to congratulate the fans. They were magnificent. I thank them for the support which never wanes.” It’s another face of the Lyon public – so joyous in victory and so loyal and proud in defeat.

The president Jean-Michel Aulas proudly claims: “Olympique Lyonnais is the best team in France, but one mustn’t forget that the club also has the best fans in France.”