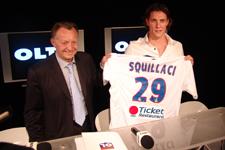 Sébastien SQUILLACI is Olympique Lyonnais' third summer recruit following Jérémy TOULALAN and Kim KÄLLSTRÖM.
Sébastien SQUILLACI has signed a four-year deal with OL.
He is 25, but will turn 26 on August 11. He’s a southerner who has married a girl from Lyon and he knows the town well.
A look at his career: He first played for Seyne sur Mer before continuing his footballing education at TOULON. He was just 12 and he would remain for five years with Toulon in the second division. He completed his apprenticeship with the MONACO reserve team from 1998-2000. He then joined AJACCIO (D2) on loan for two seasons in Ligue 2 before returning to AS MONACO and now LYON.
In four seasons at Monaco he scored ten goals. He also played 19 Champions League games including the 2004 final against FC PORTO. He has played ten times for France.
Sébastien SQUILLACI: “In my opinion, Lyon are one of Europe’s top clubs and when they make contact with you, you don’t think twice about joining. I have to perform well for Lyon and only then will I see what happens with the France squad. I can’t wait to play at the Stade Gerland with 40,000 pushing the team on.”