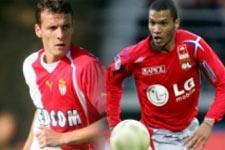 L’Olympique Lyonnais confirm that an agreement has been met with Monaco for the transfers of Sébastien SQUILLACI and Sylvain MONSOREAU. The transaction will result in Lyon paying a sum of three millions euros to the cluub monégasque.
Sébastien Squillaci, an international defender, successfully passed all medical tests at Lyon today though further tests will continue tomorrow morning.
If the results are without concern, then Sébastien SQUILLACI will sign a four-year contract with l’Olympique Lyonnais before being presented to the press in an organised press conference at the club’s headquarters.

During this ‘marathon’ day, we met up with Sébastien SQUILLACI. A warm, welcoming player who accepted this interview.

What is your opinion of l’OL ?
“It is a big club that boasts an impressive record of results. For me, it is without doubt the biggest club in France and one of the biggest in Europe.” Sébastien Squillaci adds: “When a club of this size shows an interest, there was no hesitation on my part.” To continue his career at l’OL was a logical decision for it will help him to progress: “To play in the champions League is an honour, a competition that I enjoyed with Monaco by reaching the final.”

And regarding the competition:
“It’s part of the game in which all the big clubs exist. It is up to me to perform and to secure my place in the first team. Lyon are the bets club in France and are a couple of years ahead of their rivals.”
His wife is from Lyon and it is thanks to her that Squillaci already feels comfortable in his new surroundings.
Before to leave, the subject of the French team cat me about. He admitted to being disappointed to have not been considered amongst the group of 23 players for the World Cup, a disappointment that was rapidly eradicated when Lyon showed an interest. “For me, to join Lyon makes me happy.”