S… as in Staff 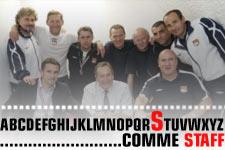 It’s time to learn your ABC with one letter a day… today’s it’s time for S... for Staff.
During Lyon’s success, there is a group who we should not forget and today we turn out attentions to the Staff.

Robert Duverne… The physical trainer is the 12th member of l’Olympique Lyonnais to be selected for the 2006 World Cup. His birth date corresponds well with the club as they search for a 6th, and possible a 7th title: 06/07/67. A pure Lyonnais, Duverne has been at the club since the days of Raymond Domenech in 1991. He also worked with Guy Stephan, Bernard Lacombe, Jacques Santini, Paul Le Guen and Gérard Houllier. This “trainer of human machines” studies the human body from head to toe, understands its workings to aid healing…

The staff is also the elegant Rémi. The “Guard” Remi, he surveys the adversaries. He is always alert, finding and eradicating any faults, to alert others. The keeps one eye on the French championship along with Gérard and Patrice.
Patrice Bergues - an amazing man. He arrived at the club less than a year ago but his impact has been immediate.

The Doc is also part of the Staff. Jean-Jacques Amprino knows the club well for he has been here since the debut of the League Cup. In his medical centre hidden behind Tola Vologe, the Doc repairs both the small and important injuries; prepares the huge medical bag before each away match, organises the “open bar “ of bananas after each training session; warns the specialists of the Lyon hospital when necessary and even creates protective masks for broken noses (ex Cris).
The Doc is assisted in his laboratory by two muscular gurus. Abdel Rédissi and Patrick Perret, the podiatrist and the masseur… The Doc, a small man of grey hair, runs great distances on both French and European pitches as soon as a toe, an ankle, a knee, a thigh or even a nose forces one of our players to the ground whilst in combat. It’s a moment of extreme urgency.

The Staff is also the grandiose Jo�l Bats, the lion and his mane. A baby lioness who was caught weeping with joy during a memorable evening in Paris.
We can not forget the imposing figure of Guy Genet, the sporting coordinator. On match night, Genet assures that both kit and balls are neatly disposed, ready for two 45-minute periods of televised football. He absorbs the spectacle, as always, with a smile. Thank you for your company Guy… Same again next year?