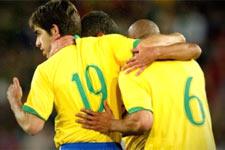 Brazil were in doubt for only 45 minutes of their match with Japan before running away comfortable winners. For their last match of the Group phase, Carlos Alberto Parreira selected a new line-up featuring Cicinho, Gilberto, Gilberto Silva, Robinho and Juninho.
The first half hour of this intriguing encounter was dominated by the Brazilians, but it was Tamada who would open the scoring for Japan thanks to a thunderous strike that beat Dida to his right. The Japanese thought that they would take this slender but surprising lead to the dressing room but just before half time, thanks to a movement started by Juninho, Ronaldo equalised with a header (45th minute), notching his 13th World Cup goal.

After a stinging shot that screamed over the bar (13th) and a 25m screamer that led to a corner in the 21st minute, Juninho would finally liberate his team-mates with a 25m pile driver in the 53rd minute - his 6th goal in 38 starts for Brazil. Yet another long range effort would unsettle the Japanese keeper in the 64th minute before being substituted by Zé Roberto.
In a holding midfield role, the Olympique Lyonnais produced a satisfactory performance. He was the lynch pin of the Brazilian midfield and was the source of many attacks thanks to his ability to his read the play and his technical brilliance.

Gilberto gave Brazil a comfortable advantage thanks to a left-footed strike in the 69th minute before Ronaldo entered the history books with his 14th goal in the final phase a World Cup (81st). The goal took him level with Germany’s Gerd Müller. After being criticised for his excess weight and his mate night clubbing, Ronaldo has responded perfectly to the numerous critics since the start of the competition.

In the other Group F match, Australia booked their passage to the second round by grabbing a late 262 draw with Croatia.

Earlier in the day, Italy confirmed their position of Group E winners thanks to a 2-0 victory of the Czech Republic (Materazzi and Inzaghi). Marcello Lippi’s players eased through to the second round with Ghana, who qualified thanks to their 2-1 victory over the United States. The Czech Republic were unable to buildon their opening victory against the USA and finished third in the group.

In the second round, Italy will play Australia on Monday June 26th at 17:00 CET. Brazil will meet Ghana, who will be without the inspirational Michael Essien, on Tuesday Juan 27th at 17:00 CET
Facebook
Tweet
Forum