P... as in President 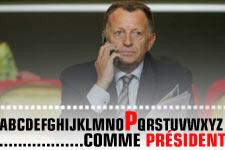 It’s time to learn your ABC with one letter a day… today’s it’s time for P... as in President. For the fifth consecutive year, the Olympique Lyonnais boasts to be the capital of French football.
Jean-Michel Aulas can be proud of his work, he who took over a struggling, politically ravaged club almost twenty years ago. L’OL had been in the depths of the second division for many years and the risk to take over the Presidency of the club required great courage.

Today, Lyon feature among Europe’s top ten clubs. The road has been long but filled with many exploits under Aulas. The Olympique Lyonnais knew how to reconstruct itself thanks to its solid foundations. The rise was progressive, starting with promotion to Ligue 1 in 1989 and then European football in 1991. L’OL earned their place in Ligue 1 thanks to simple politics and a group of high-class players (Garde, Genesio, N’Gotty, Maurice,…). Lyon continued to progress, taking it step-by-step, and its President became increasing acquainted with success. L’OL finished second in the championship in 1995 and etched its name in Europe the following season by knocking out Lazio in the last 16 of the UEFA Cup thanks to two memorable performances.
L’Olympique Lyonnais became one of the elite formations in France, and in 1999, the club made a massive step forward thanks to the cooperation with the Pathé group and the signing of Sonny Anderson. Thanks to the Brazilian’s arrival, Jean-Michel Aulas could finally dream of becoming champions of France.

[IMG40689#R] The 2001 League Cup brought their first trophy since the French Cup in 1973. L’OL and its supporters are by now in awe, and Jean-Michel Aulas’ master plan took another dimension with the clubs first Ligue 1 title in 2002. The president’s promises weren’t in vain. L’OL were finally kings of the hexagon. However, instead of sitting back on his laurels, the president persisted with four successive titles. L’OL just gets stronger every year, not only on the pitch, but also on the market where the club is developing rapidly, signing new contracts and bringing in ever greater revenue.

Lyon demand respect on the national level and huge interest in Europe. Could Jean-Michel Aulas have imagined that 20 years after taking over the club, it would humiliate the legendary Real Madrid in the Champions League? Well, that they did and Lyon is now at the crossroads of fantasy and reality. Following three appearances in the Champions League quarter-finals, Lyon can now dream of winning Europe’s biggest prize. Jean-Michel Aulas believes the dream will become a reality within three years.