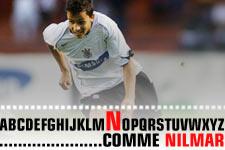 It’s time to learn your ABC with one letter a day… today’s it’s time for N… as in Nilmar who, homesick and often a substitute, decided to spend last season back in his native Brazil.
This young Brazilian attacker only enjoyed a brief stay at Lyon, an unfortunate fact, because Honorato is a player with unlimited potential. During the 2004 off season, Honorato Da Silva Nilmar, 19-year-old Brazilian starlet joined Lyon from International Porto Alegre. And what an impact he made during his debut match against Rennes in September 2004. Coming on in the 74th minute to replace Pierre Alain Frau with the score locked at 0-0, the Lyon No.11 turned the match on its head. Two goals in six minutes (81’ and 87’) offered victory to OL, 1-2) and announced Nilmar to the nation.

But after such a sensational debut, Nilmar failed to go on with it. In all competition in the 2004-05 season, Nilmar made more than 40 appearances in the Lyon shirt for just seven goals.

Homesick and sick of sitting on the bench, Honorato Da Silva Nilmar, decided last summer to return to Brazil. A smart move because Nilmar joined Corinthians and scored 18 goals in 19 games of the Paulista regional championship. The on-loan striker was not only named best forward, but also best player of the Sao Paulo league.

Already considered a star and a future great of Brazilian football Nilmar was called up to the ‘selecao’. But despite being tested on several occasions, coach Carlos Alberto Parreira ultimately chose to take another Lyon forward to Germany: Fred.

Despite this set-back, Nilmar does have reason to smile. As he wished, Corinthians triggered the buy-out clause in his loan deal a few days ago for a fee of €10m. The young Brazilian star is no more a member of Olympique Lyonnais.
Facebook
Tweet
Forum