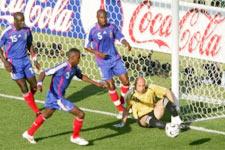 Having been held to draws in qualifying (0-0 & 1-1), honours were shared a third time when France and Switzerland drew 0-0 in Stuttgart for their opening match of the World Cup.
During a tense match, highlighted by a number of wasted chances, the French dominated proceedings but it was the Swiss, through Frei that came closest to scoring when he hit the post after 24 minutes of play.

Three Lyonnais started the match – two in Bleu and one in Rouge. Malouda, rested recently was back on the bench for the opening game of the tournament. Abidal continued his good recent form and continued at left-back. Coach Raymond Domenech alo changed the side’s attacking formation, electing to play with just one striker, while Ribéry, Zidane and Wiltord lined up behind Henry in a new-look 4-2-3-1.

While the warm-up games had seen France playing mostly down the left flank, the new formation brought with a more balanced approach. The presence of Nino Wiltord from the start on the right offered more options. It was Wiltord, earning his 80th cap, that opened hostilities with a great cross for Henry but the Gunner couldn’t hit the target.
With the roles reversed, Wiltord was just to short to connect with Henry’s 21st-minute service. Finally, just before being replaced by Dhorasoo, Wiltord was set clean through after a neat one-two with Zidane but was reeled in by the returning Degen (84’).

As for Switzerland’s Lyonnais, he was guilty of an obvious, if unintentional hand ball which the referee failed to penalise in the box. Patrick Müller was replaced after 70 minutes.