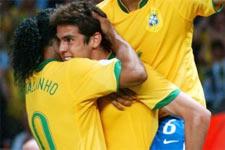 Red hot favourites Brazil, with their legion of stars made a winning start to their title defence with a 1-0 victory over an impressive Croatia.
The author of the Selecao’s success was Kaka who scored the game’s only goal with a stunning left-foot shot from just outside the area, moments before the break. In the second half, the Croatian side, third in France ’98, were unable to find a way passed Dida in the Brazil goal despite a number of shots.
While failing to move into top gear, the reigning world champions will be more than satisfied at claiming all three points from the match which pitted the two group favourites together.
No Lyon players took part in the match with Brazil making just one change: Robinho coming in for Ronaldo.