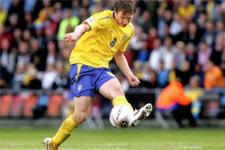 Sweden failed to make a winning start to their World Cup campaign, held to a scoreless draw by Trinidad and Tobago at the Westfalenstadion in Dortmund in their Group B clash.
Earlier in the afternoon, England went to the top of the Group B standings with a drab 1-0 win over Paraguay, thanks to a Gamarra own goal. However Sweden, coached by Lars Lagerbäck were unable to do the same against a surprising and courageous Trinidad and Tobago outfit.
Playing against 10 men from the first minute of the second half, the teammates of Kim Källström, introduced for the final ten minutes of the match, were unable to find a route to goal… much to the delight of the Caribbean supporters who were more than satisfied with a draw.

Sweden currently sit equal second in Group B and play Paraguay in Berlin on Thursday June 15 and then England on Tuesday June 20.
Facebook
Tweet
Forum