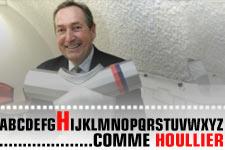 It’s time to learn your ABC, with one letter per day… and today it’s H...as in Houllier. First season, first title: Gérard Houllier didn’t mess up his first season at the Stade Gerland, leading OL to an historic fifth consecutive league crown.
He came to drive a Ferrari and he took the chequered flag in style. Houllier didn’t mes up his first season in charge of the champions. Certainly the quarter-final defeats to AC Milan in the Champions League and Marseille in the Coupe de France meft a bitter taste for the nex coach, but the overall record is more than positive with a fifth consecutive Ligue 1 crown and the underniable domination of the French league.

OL was in a class of its own in L1 this season and Gérard Houllier left his mark all over the park. It’s not easy to walk in and take over the reigns of a four-time reigning champion, but the former Liverpool boss was up to the job, installing the principals of squad rotation and also placed attacking moves. Lyon was about team management and with turnover came new discoveries. The wave of injuries which gripped the defence threw forward François Clerc at right-back. The Lyon coach had confidence in the man from Bress and the results were immediate. The same was seen in the Champions League where Houllier didn’t hesitate to throw youngster Romain Beynié into the big time against Rosenborg. It was back in December when the 17-year-old received that incredible gift and he made the most of it, starting the move which led to Fred’s winning goal.

[IMG40658#R]Gérard Houllier also protected his squad for the entirety of the season and relied on a top quality backroom staff. Patrice Bergues, his long-time friend arrived with him. The duo compliment each other and their partnership was another of the keys to OL’s success as they formed a close-knit unit with the existing staff of Rémi Garde, Joël Bats and Robert Duverne.

And the title won in Paris. It was a symbolic moment for Gérard Houllier, who had won the capital club its first ever league crown back in 1986. 20 years later and few kilometres further south the French tactician’s career continues to notch up the achievements. It must be said that Houllier did well to choose Lyon, capital of the Gauls and of French football for five years now…