E… as in Europe 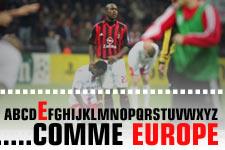 It’s time to learn your ABC with one letter a day in June… Today it’s time for the letter E… as in Europe.
Once again OL’s European adventure came to a halt at the doors of the Champions League semi-finals...
Even today, it’s still hard to come to terms with OL’s cruel elimination from the Champions League. But all the same, for the second year in a row, OL’s European adventure came shuddering to an abrupt halt just minutes away from a semi-final berth. The players were unable to fulfil the president Jean-Michel Aulas’ dream of winning the European Cup at the Stade de France, but the 2005-06 campaign was still full of highlights all the same...

Match 1: Lyon 3-0 Real Madrid
On paper Group F was not an open and shut affair. Yet from the very first match against the great Real Madrid, it was Lyon that became galactic. In a Stade Gerland at boiling point, Lyon crushed the Real of Beckham, Raul and Roberto Carlos. Juninho with a free-kick, Carew with a header and Wiltord with the right boot gave victory to “Les Rouge et Bleu”. That September 13 evening in 2005 saw OL produce an incredible match and write a new page in the history of the club.

Match 2: Rosenborg 0-1 Lyon
The Lerkendal Stadion in Rosenborg is home to one of Olympique Lyonnais’ worst memories. In the 2002-03 season Sonny Anderson and Co were held to a 1-1 draw in their final group match which cost them a place in the next round. But this year, Gérard Houllier’s side was able to turn that result around. Thanks to a winning header from Cris, Lyon won 1-0 in Norway. The second win in a row also saw Lyon comfortably leading the group.

Match 3: Lyon 2-1 Olympiakos
Just four days after a tough home win over Ajaccio, 3-2, OL hosted Olympiakos, bottom of Group F after two straight defeats. Despite struggling on the table, Trond Sollied’s Greek side was up for the battle against the group leaders. It was Juninho that opened the scoring early with another magical free-kick (4’). Kafes equalised late in the match (84’) but OL found the necessary resources to pull the result out of the fire. Well played in behind the defence by Juninho, Sidney Govou beat Nikopolidis and offered three more points to OL.

Match 4: Olympiakos 1-4 Lyon
Two weeks later, at the start of November OL was back up against l’Olympiakos, this time in Greece, with the chance to confirm their qualification for the knock-out stage. In the incredibly unsettling atmosphere, Gérard Houllier’s side were stunned when Babangida opened the mark after just three minutes on the clock. That goal woke up Lyon and once they got into their stride Juninho, Diarra and Carew (x2) all found the back of the net. OL ran out 4-1 winners on the night and qualified for the next round with two games to spare.

Match 5: Real Madrid 1-1 Lyon
At the end of November, for Match Day 5, Real Madrid and OL, both already qualified met to decide who would qualify top of the group. In an Estadio Santiago Bernabeu including 4,000 travelling OL fans, Lyon produced a truly accomplished performance. Trailing on the scoreboard, Gérard Houllier’s side was once again able to fight back onto equal terms thanks to a superb back-heel from John Carew, which earned OL a deserved point.

Match 6: Lyon 2-1 Rosenborg
For the final group game, Gérard Houllier decided to give his youngsters a taste of Champions League football. With seven changes from the regular side, Lyon’s babies didn’t disappoint. Karim Benzema scored his first ever professional goal, and following Braaten’s 68th minute equaliser, OL had to wait until stoppage time to get the win. Played in by Ben Arfa, Fred, scored the winner with his left foot.

OL finished the group stage in first place with 16 points from a possible 18. OL also boasted the best attack of the competition with 13 goals scored.

Last 16: PSV Eindhoven – Lyon
The draw gave OL the chance to get revenge over PSV Eindhoven. Eliminated on penalties the previous season by the Dutch side, OL had plenty of motivation. A solid and efficient display in the first leg saw OL return to the Stade Gerland with a 1-0 lead. With the Stade Gerland filled to capacity, Houllier’s players steamrolled their Dutch opposition 4-0. The final goal of the evening is still the image everyone remembers. Fred, having just become a father for the first time pulled out a “Ronaldinho-esque” dribble in the penalty area before unleashing a thunderous left-footed shot into the net. A great gift to OL and the little Geovanna.

Quarter-final: Lyon – AC Milan
One of Europe’s biggest clubs, AC Milan, was the setting for one of the clubs biggest disappointments. Not once, over the two legs did Lyon appear in any way inferior to Carlo Ancelotti’s side. But it was still the Italians that qualified for the semi-finals... Terribly upsetting, but not depressing, because OL had earned the respect of Europe for a stunning campaign.

For OL, the quarter-finals were once again their downfall, but with a good record nonetheless: 7 victories, 2 draws and 1 defeat.