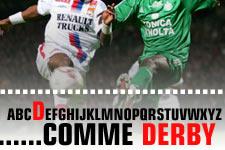 From the green of the playing field, to the green of the tops… everything is green. For some, the colour provokes a painful repulsion. Yet the rivalry between “Les Rouge et Bleu” and “Les Verts”, Lyon and St-Etienne, did not always exist.

Claude Cretin, a specialist on relations between the two cities, claims: “Les Stéphanois have always feared being considered a mere ugly, industrial working class suburb of Lyon. While Les Lyonnais have always thought of St-Etienne as being off in the mountains, a little factory town with absolutely nothing in common with the great bourgeoisie of Lyon – that’s where the general derby rivalry came from. But there are even more precise reasons.”

The origin of the derby dates back to the 1790s when Lyon and St-Etienne, prefecture and sub-prefecture of the Rhône-Alpes region joined up to confront the centralised power of the capital, Paris.

“Lyon wanted to break free and revolted against Paris. The bad thing was that a large portion of troops from St-Etienne came to reinforce the Lyon ranks. Then then in August 1793, when Paris descended on the region to gets things back in order, Les Stephanois quickly headed home and Lyon was severely punished… we’ve all heard about the bombing of the Brotteaux, and so that the punishment would last they also cut the region into two, Rhône on one side and Loire on the other.” From that moment on, St-Etienne always feared a reunification between the Rhône-et-Loire, and have always defender their territory.
In the twentieth century an economic rivalry was added to the geographical rivalry, especially in the fabric industry. Today there’s no more talk of all that, but the rivalry lives on, distilled into the popular fervour seen at the Stades Gerland and Geoffroy-Guichard.
“It’s about settling old scores that no longer exist. In the middle ages, in rural France when there was a problem between two villages, how do you think it was settled? Everyone would head out onto a field and give each other a good thrashing, sometimes in the form of a ball game. They used to play Soule, which is an old traditional bal land when they played Soule it wasn’t a game, there were deaths.
“However, now, as opposed to the olden times, the two teams have very little local connection.”