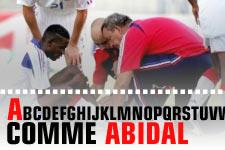 It’s time to learn your ABC… We propose one letter per day and today we start at the very beginning with A... as in Abidal.
Les Lyonnais found themselves at Tignes for their traditional pre-season training camp. The bodies are barely back in shape for the first outings and already it’s off to South Korea where OL has been invited to take part in the second edition of the Peace Cup along with PSV Eindhoven, Once Caldas, Tottenham, and Real Sociedad… The squad jets off for Seoul on July 13, with their first match against the Colombians of Once Caldas scheduled for July 15 in Ulsan. After 44 minutes of the match, the left foot of Eric Abidal makes fierce contact with some Colombian studs. The former Lille defender doesn’t return to the playing surface, and heads instead straight for hospital where his foot is X-rayed, plastered and he is booked on an early flight back to France. The reason? A fractured foot, which failed to dampen the player’s high spirits within a squad that would eventually lose in the final against the English side Tottenham.

The Martinique-born player made his return to action on October 16 at the Stade Gerland against Ajaccio. Just six games later and he suffered a new injury to the same foot in the controversial match against Costa Rica in Martinique. This time he doesn’t escape an operation, before returning once again on February 17 against Nantes. It was another difficult season for the Lyonnais who had already suffered at the hands of several niggling injuries in the 2004-05 season.

After setting up goals against Sochaux and St-Etienne, for Florent Malouda and Fred respectively, and with energy and desire to burn, Eric is heading to the World Cup in Germany with France. It has been an amazing season of ups and downs for this lefty, who will turn 27 this July.