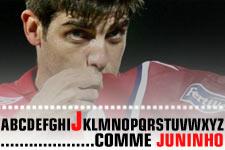 It’s time to learn your ABC with one new letter. Today it’s time for J... as in Juninho. Voted Ligue 1 player of the year by the UNFP, Juninho once again left his mark on the 2005-06 season.
‘Juni’, a shy man, who arrived one night in June 2001 at the St Exupéry airport without a word of French, would quickly find his place at Lyon.
Juninho, the modest: he never speaks about his own performances, but that of the team, even when it’s one of his magical free-kicks that earned the victory. Mr Juninho is a model team player.
Juninho, the devil: 27 goals in 5 seasons from direct free-kicks. He has beaten 23 different goalkeepers from set pieces. One of the best was this season against Ajaccio in Corsica… a meteoric strike from more than 35m out.
Juninho, the loyal: 5 seasons with OL and five league crowns.
Juninho, the goalscorer: Against Le Mans, in the final game of the season, he scored his 50th league goal in Lyon colours. In the process, entering into the club’s top ten all-time scorers.

Juninho is one of the leaders of the Lyon team and victory is one of his philosophies. To lose almost makes him ill, especially when the defeat is due to a refereeing error, as was the case in the 2004-05 Champions League quarter-finals against PSV Eindhoven… He cried... [IMG40664#R]The 31-year-old Brazilian wants to help Lyon continue to grow in power. One his his dearest dreams is to hold aloft the European Cup with the French champs. Today his has momentarily swapped his red and blue Lyon top for the yellow of Brazil’s Selecao, a national that unites him with two other Lyon teammates, Cris and Fred.

In his two warm-up match appearances, Juni scored twice, including one from his favourite pastime, the free-kick.
“This will be my first World Cup… and also my last. If I don’t make the most of it, I will always have this question mark over my career in Brazil. I can’t make a single error – it’s my only chance,” he told OLWEB.fr at the start of 2006.
Just hours away from the start of the World Cup, Juninho, the discrete professional is probably locked away in his room concentrating on other free-kick, even more important than the last 27 magic moments…