11 Lyonnais for the World Cup! 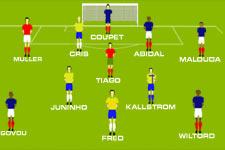 Lyon now boasts 11 of its players at the World Cup in what could represent a formidable starting XI for OL in Germany. On paper, it’s an exciting team...
A closer look reveals that the greatest concntration of Lyon players is indeed in the France squad. Already the team with the most representatives in Les Bleus, the late call-up of Sidney Govou makes it now five Lyonnais in Raymond Domenech’s side. Just four days before France’s first match, Eric Abidal and Florent Malouda can consider themselves ‘first choice’ after excellent warm-up campaigns.
Of the three other Lyonnais, Sylvain Wiltord, one of the pillars of the qualifying phase, is certain to feature regularly from the bench.

Olympique Lyonnais is also well represented within the Brazil squad... Juninho, Cris and Fred were all picked by Carlos Alberto Parreira. And while Juninho will feature in the World Cup, the two other Olympians may also get their chance for the Selecao, despite yet to play a single minute between them in Brazil’s two warm-up matches.

5 French... 3 Brazilians... and three other Lyon players: Patrick Müller is one of the central elements in the Switzerland team.... Tiago faces stiff opposition for a starting place in the talented Portugal squad with the likes of Maniche, Costinha and Deco in central midfield… and finally, the latest signing, Kim Källström who is an undisputed starter in dark horse Sweden...

11 players, 5 countries… just missing a coach... but there is always Robert Duverne...
And if we were to construct this OL World Cup squad, who would play in a typical 4-3-3 formation, here’s what it would look like: