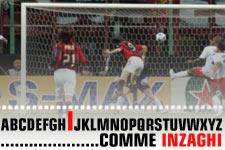 It’s time to learn your ABC, with one letter per day… and today it’s I… as in Inzaghi, the man that crushed Lyon’s Champions League hopes.
Without two terrible final minutes at the San Siro, Iker Casillas, Charles Itandje or even Ilan would have been perfect subjects to represent the ninth letter of the alphabet. Without those unimaginable rebounds off both posts and that final shot, Filippo Inzaghi would not by the one crystallised moment of disappointment in an otherwise superb season.
Yet Super Pippo isn’t blessed with astonishing speed, nor does power of his shot send fear into goalkeepers. But, just like Gerd Müller or Ruud Van Nistelrooy, this striker, 1.81m, 74kg, born on August 9 1973, is obsessed with the goal.
Thanks to his incredible positional sense and his ability to play with his back to goal, the former Juventus striker has enjoyed something of a renaissance during the 2005-06 season. After a 2005 upset by a succession of injuries, he emerged from the ashes to score 12 goals in 22 Serie A games and, most importantly 4 goals in 6 Champions League where he replaced Gilardino in the starting line-up.
On April 4, 2006, Carlo Ancelotti decided to bench the former Parma player in preference to Inzaghi, in an attempt to break down an apparently impenetrable Lyon defence. As early as the 25th minute, the rossoneri hit-man opened the scoring before poking home the coup de grâce in the 88th minute. The cruelness of the situation brought back the words of Vikash Dhorasoo from just days before the match: “Beware of Pippo Inzaghi because whenever the ball hits the post it always bounces out to him.”
If Pippo, just like Roth or Vata, is to be recognised as one of the great haunting figures of French football in European competition, his goal also highlights just how close Lyon came to overthrowing the famous AC Milan. 178 minutes of football in which Gérard Houllier’s side let Lyon and France dream. Nobody will forget Fred’s header against the woodwork, the passing chains and the image of Milan forced onto the back foot by Lyon’s incessant pressing game.
Jean-Michel Aulas’s club has never been as close to making the semi-finals of Europe’s premier club competition. If Pippo Inzaghi has left his mark on the 2005-06 season, it is by symbolising, more than any other player just how strong OL has become and how glorious the future is that rises to meet it…
Facebook
Tweet
Forum