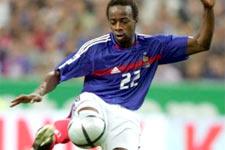 A fifth Lyon player has been called up to the France team. Sidney Govou has received a late call up for Germany, joining club teammates Coupet, Abidal, Wiltord and Malouda.
Sidney Govou received the call from France coach Raymond Domenech to replace the unfortunate Djibril Cissé who fractured his leg in France's friendly against China on Wednesday. Govou has already been called up as a late replacement once before, replacing Ludovic Giuly for the European Championships in Portugal in 2004. THe Lyon forward already has 19 caps for France, scoring three goals. His most recent appearance in Bleu dates back to November 9, 2005 against Costa Rica.
Govou will join up with the squad in Saint-Etienne before flying out on Thursday afternoon for Germany. Olympique Lyonnais now counts 11 of its players competing at the World Cup this month (Cris, Juninho, Fred, Tiago, Müller, Källström, Coupet, Malouda, Abidal, Wiltord and Govou).
Facebook
Tweet
Forum