Les Bleus on the line... 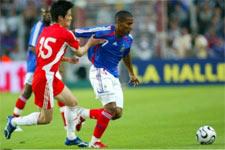 France won their final World Cup warm-up match against China, 3-1 on Wednesday thanks to two late goals.
While the national anthems played in the Stade Geoffroy-Guichard, the French team was identical to that which took on Denmark last week, with one exception: Djibril Cissé came into the side alongside Thierry Henry in attack.

Les Bleus won the match, but it left a bitter taste all the same following the serious injury to Djibril Cissé. The atmosphere within the group plummeted with the news that he was out of the World Cup – a real blow to the squad which had seemed to be knitting nicely.

Les Lyonnais Malouda and Abidal were once again chosen to patrol the left side of the park. They were joined by a third ‘Gones’ in the 83rd minute with the introduction of Sylvain Wiltord who came in for David Trezeguet, the first scorer of the evening.
. Acknowledged as being one of France’s danger weapons, the left-sided pair are capitalising on their club-acquired understanding to terrorise opposition defences. Following Mexico and Denmark, it was China’s turn to play the price. And despite a honourable performance and a penamty equaliser, the Chinese let the result get away from them in stoppage time with an own-goal from Wang Yun (90’) and a Thierry Henry goal (90+2’).

Speaking to TF1 after the match, Eric Abidal acknowledged that there are still things to rectify and work on before June 13 and the match against Switzerland and club teammate Patrick Müller. With 15 duels won and an impressive attacking contribution, Eric was impressive in what Raymond Domenench describes as “an impressive defensive solidity”. Yet Domenech also claimed his side played “on the back foot, a little with the hand-break on”, with one eye on next Tuesday’s first group match against the Swiss.