Club / The off season 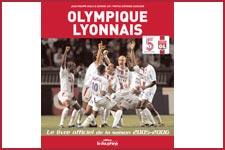 Olympique Lyonnais has pride of place in the bookstores with the new book that reviews the 2005-06 season.
It’s the fourth edition of this 160-page book co-written by Edward Jay (RMC INFO) and Jean-Philippe Baille (RTL). Once again it’s your chance to relive the march to the fifth league crown match by match as well as the Champions League campaign.
Gérard Houllier reveals his methods and the success of his squad. You’ll also find player profiles of every squad member, as well as countless photos – over 200 in all – including originals from photographer Stéphane Guiochon.
The two journalists also discuss the statistics of a season that broke all the records.
The book is out now and available in all good bookstores for just €34.90.