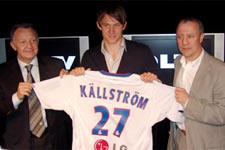 On Saturday afternoon, accompanied by the president Jean-Michel Aulas and his sporting advisor, Bernard Lacombe, Kim Källström revealed his first reactions to joining his new club: Les Rouge et Bleu…
The Sweden international signed a four-year deal with Lyon following a €8m move from Rennes. “When a club like Lyon comes knocking, you’re obliged to say ‘yes’, especially for me after two years in France, I’ve seen OL’s quality forst hand. As soon as the club contacted me I made them my number one priority.
“Since the start of my career I’ve been improving little by little, from club to club – so obviously a good step to be joining Lyon.”

At Rennes? “I think it was the right time to move on. As for Lyon, when I played against them this season and when I saw them on TV in the Champions League, I really was impressed by watching them play. To that you can add the atmosphere, the records, the results… In fact it was a very easy decision to make.”

The competition for places? “That doesn’t scare me. It exists in all the big European clubs, you just have to accept it. I know what’s waiting for me here and it won’t be a shock… I know the rules.”

During the press conference, several journalists were surprised by the level of the player’s French language skills: “I had a few lessons when I first arrived in France, but I mostly picked it up in the changing-rooms.”
His squad number is yet to be definitively chosen, but for the press conference he was sporting the No.27.

[IMG40652#R]Following the signature of Jérémy Toulalan, Kim Kallström is joining the Olympian squad. The midfield now seems complete, as confirmed the president: “Last season we lost to AC Milan with Juninho suspended from the first match and Tiago from the return leg. The point hit home. As a result we decided to reinforce the team in this domain where we often suffer from injuries and suspension. We know that a number of clubs are sniffing around our players and to deal with this is to take the necessary precautions. Now we are in a position to resist against the financial pressures of selling off our midfielders.
“Kim was a priority for us and we were a priority for him. Today we are very satisfied with another objective achieved.”

Other players?
“Concerning Franck Ribéry, we obviously hope that he will come to Lyon. For the moment Marseille are not convinced and that’s completely understandable. Last season we weren’t in agreement with Chelsea for Michael Essien, but in the end, common sense prevailed.

“Franck Ribéry told me in the last few days, as did his agent, that it was his intention to quit Marseille and join Lyon, now that his favourite coach, Jean Fernandez, had left OM for Auxerre. He also told me that he didn’t have any certainty of playing Champions League football with Marseille in the short term. Now the ball is in Marseille’s camp, for the moment I’d say it’s 50/50. There’s a 50% chance he’ll be playing for OL next season.”

Player swaps?
[IMG40608#L]“We’re not discussing any player swaps. I talked with Pape Diouf and explained to him that the money we received from Chelsea for Essien allowed us to recruit brilliantly and once again finish first. From time to time a president has to know when to look beyond his initial reaction and his pride and look at the bigger picture, that is : to have good players in each position on the field in order to keep getting better.

“At any rate, we still need to negotiate, but there’s no rush, because for the moment, Sidney Govou is still there. We need a little more time, and as for me, I’m heading off to support France and in particular the five OL players, but also Franck Ribéry, just like I’ll be supporting Sweden with Kim Kallström, Portugal with Tiago, Switzerland with Patrick Müller and Brazil with Fred, Cris and Juninho.”

In attack?
“We had the best attack in last season’s Champions League and we broke all the goal-scoring records in Ligue 1… I don’t think we’re missing much up front.

[IMG40653#R]“OL has grown and we’re in the process of finalising a budget of between €150m and €160m for next season. Obviously we have a certain financial status which will enable us to seize a given opportunity. There was that of Drogba, but it closed very quickly because Chelsea didn’t want to let him leave, José Mourinho said “niet” despite the player’s interest in the move.

“Today we are very happy with our three attackers, Fred, Carew and Benzema, without forgetting that we have just resigned Wiltord. Malouda has also extended his current deal and Sidney Govou is still here, even if we have said he can move on if he wants to.”
Facebook
Tweet
Forum