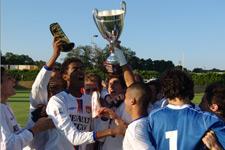 Lyon have been crowned French reserve champions for the fifth time in the club’s history. Following successes in 1993, 1998, 2001 and 2003, it was the turn of the 2006 to lift the trophy. Robert Valette’s side capped off a great season for the ‘generation 1986’ in which Bettiol and Benhamida signed their first professional contracts while Duperray, Thomas and Cuenca will continue their playing careers for at least another season.
Lyon went into the final without the services of Jean-José Cuenca, injured during the semi-final win over Toulouse and it was Rennes that made the brighter start, creating a number of presentable chances through their untenable striker Jires Ekoko. The Congolese striker, who has just signed a three-year professional contract with the Brittany side, drew fine saves from Rémi Riou in the OL goal. Lyon fought back in the closing stages of the first half and Grégory Bettiol wasn’t far away from opening the scoring from a Julien Faussurier cross. At the break the score was 0-0.
OL began the second half in style as Loïc Rémy caused panic in the Rennes defence before Bettiol found Rennes ‘keeper Grégory Douard in his path. However it was Rennes that went ahead against the run of play just before the hour mark when Bira Dembélé headed home a corner at the back post (0-1).
[IMG40650#R]The painful memories of the last two Gambardella Cup finals came flooding back before Bettiol levelled the scores with a thunderous free-kick which crashed home off the underside of the bar (1-1). It was a superb strike and his 24th of the season which sees him join Beauvais’ Ahmed Tangeaoui atop the scoring charts.
Rennes was stunned by the ferocious equaliser and Lyon, further buoyed by the introduction of an excellent Karaboué ran away with it: in the 78th minute, Romain Beynié crossed to the back post where Anthony Mounier made no mistake (2-1). The dye had been cast and Mounier got a second and eighth of the CFA season, after more brilliant lead up work by Karaboué.
Check out video highlights of the final on OLWeb Premium