Under-21: Toulalan fires France into semis 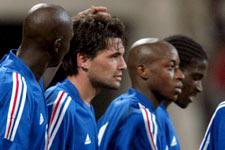 After defeating Portugal, 1-0, and Germany, 3-0, the France Under-21 side completed a 2-0 victory over Serbia and Montenegro in Braga on Sunday to qualify for the semi-finals of the European Under-21 Championships.
Former Lyon forward Bryan Bergougnoux met a Yohann Gouffran cross at the back post to open the scoring after 33 minutes.

20 minutes later, Bryan launched a rapid counterattack up the right and cut the ball back to Le Tallec. The France forward laid the ball on for his captain Jérémy Toulalan just inside the area. The new Lyon player beat his former Nantes teammate Vladimir Stojkovic for his fourth goal with Les Espoirs.

Thanks to their three consecutive victories, René Girard's side finsihed top of Group A and will now meet the second placed team from Group B in Thursday's semi-final.
Facebook
Tweet
Forum