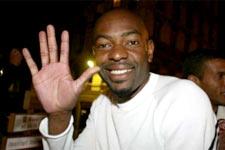 Olympique Lyonnais captain Claudio Caçapa celebrated his 30th birthday on Monday, May 29.
Direct from Athletico Mineiro, Claudio arrived in Lyon in the winter of 2000. Cacapa played his first Ligue 1 match on February 17 2001 away to Toulouse. Lyon managed to earn a 1-1 draw.

Today, the Brazilian boasts one of French football's most complete CVs, with a Coupe de Ligue winners medal, two Trophée des Champions and five league crowns. A record, along with three of his teammates, that seems him enter into the history of French football.

This season, he played 26 matches in L1 for 2 goals, both against Nancy. He scored a thrilling winner in the first game at the Stade Gerland and then opened the scoring in the return match five minutes into the second half.
Olympique Lyonnais would like to wish a very happy birthday to Claudio Caçapa, 30 years old today!
Facebook
Tweet
Forum