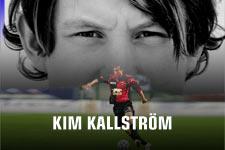 After having undergone the traditional medical visit, and just hours before making the official announcement of his transfer to OL, Sweden international Kim Kallström spoke exclusively to olweb.fr.
The soon-to-be former Rennes midfielder made joining Lyon his “No.1 priority” as soon as he became aware of Lyon’s interest in him: “It’s a great honour for me to be joining the biggest club in France, just two and a half years after coming to France.”
Indeed, with the Stade Rennais hosting the Swede’s arrival on French soil in 2003, Kim Kallström had played 117, scoring 40 goals in Sweden for Djurgarden IF and BK Hacken. He then played a further 83 league games for Rennes, scoring 20 goals. Finally, joining Lyon, “a very consistent club”, is “the best thing that could happen to me.”

As for the World Cup in which he will compete with Sweden in Group B, he hopes to “go as far as possible with the goal of reaching at least the second round.” Group B also consists England, Paraguay and Trinidad & Tobago.
Facebook
Tweet
Forum