Lyon represented in France U-21 win 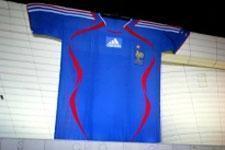 There was a great win for the France Under-21 side on Thursday in the European Under-21 Championships. In Guimares, René Girard's side beat Germany 3-0.
It was Florent Sinama-Pongolle that got the ball rolling moments before the half-time break with a free-kick (45'). Caen's Yoan Gouffran (72') added a second before Rio Mavuba completed the scoring with a great solo effort (75').

Two Lyon players, François Clerc and Jérémy Toulalan took part in the victory. Rested for the opening match against Portugal, the OL right-back Clerc made his first appearance in the competition while Toulalan made his second start in as many matches. Toulalan was replaced at half-time by Rennes' Yoann Gourcuff.

Despite two wins in a row, Les Bleuets are still not qualoified after Serbia and Montenegro registered a 2-0 win over Portugal.

On Sunday, in Braga, Rio Mavuba and Co. will need a draw or a narrow defeat to Serbia and Montenegro in order to qualify for the semi-finals of a competition in which they are shaping up as one of the favourites.
Facebook
Tweet
Forum