Toulalan and Berthod start in Portugal 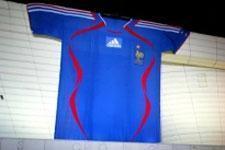 Jérémy Toulalan shone in the midfield. Man of the match, by a long way, he won an incredible number of balls and his distribution was faultless. The daily sports paper L’Equipe gave him an 8/10.
On his left flank, Jérémy Berthod was a rock against Barcelona winger Quaresma.
Lyon right-back, François Clerc is also in the 22-man squad.

In the other Group A match, Germany defeated Serbie and Montenegro 1-0 before playing France this Thursday in Guimares.

Group B consists the Ukraine, the Netherlands, Italy and Denmark. The top two from each group qualify for the semi-finals which will be held on June 1.
Facebook
Tweet
Forum