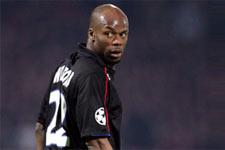 Olympique Lyonnais has agreed terms with their striker Sylvain Wiltord on a new two-year deal with a third optional season.
This season, he was nominated as one of the top four players in the league and named in the Ligue 1 Best XI at the UNFP Awards Night. Sylvain WILTORD plays a leading role at Olympic Lyonnais, ever since his arrival back in 2004. This season he was brilliant in Ligue 1 with 12 goals, but also in the Champions League where he scored eight times in 18 matches.

This signature displays club’s desire to show confidence in the squad that has performed so brilliantly in recent seasons, while always looking to improve and strengthen the side with the arrival of some of France’s hottest football prospects, such as Jérémy TOULALAN.
Facebook
Tweet
Forum