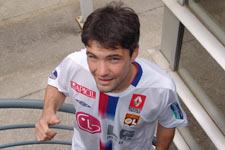 After signing a four-year contract with Olympique Lyonnais, Jérémy Toulalan shares his first impressions of the club and reveals the reasons why he decided to join the five-time French champions.
Jérémy, why did you choose Olympique Lyonnais?
Well, already, the club wanted to sign me last year. It's a club that has won five French titles, has reached the top and has managed to stay there. So I've come to reach the top and keep improving.

Last year were already close to signing...
Exactly. It didn't happen because Nantes didn't want it to. For my part, I didn't want to 'push too hard'. So I decided to wait for it to happen naturally.

Is there a bit of emotion all the same at leaving Nantes?
There's a little pull at the heart strings because I was born there and learnt to play football there. All the same, in life you have to make choices and I've got my career to think about.

What do you think aboutOlympique Lyonnais ?
They're a club that has stood the test of time and is perfectly structured.

In signing for OL there's always a risk of not being a 'starting player'...
Yes, but you still keep improving. In joining a great team you know you're not going to play all the time, but like me, OL is ambitious and will probably be playing to win every competition. With so many matches the squad will rotate a fair bit.

If you had to, how would you describe yourself as a player?
I'm a player that fights, that wins a lot of balls. I'm more or less a defensive midfielder even if I play a little more attacking with the France Under-21 side. I also know I need to improve in going forward. That's another of the reasons why I decided to join OL.

What do you want tell the Lyon supporters?
I hope they're happy with my arrival and I can assure you I'll do everything I can so that they will be.