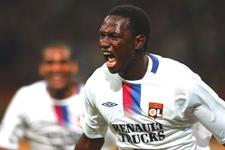 At just 25 years of age, Mahamadou Diarra is already one of Lyon's most senior players. After joining the club at the start of the 2002-03 season, he has won four consecutive French league crowns.
A pillar in the Lyon changing-room and midfield, the Malian had a superb 2005-06 season, during which he scored 6 goals in 44 games, his best return since arriving in France.

He had a difficult summer during which Mali failed to qualify for the World Cup, despite the brilliant performances of the Lyon No.7. The third-most used player this season by Gérard Houllier (behind Coupet and Cris), he was particularly incredible against Le Mans where he touched the ball 108 times in the opening match of the season. Another highight of his season was the header at San Siro which gave Lyon hope for 57 minutes.